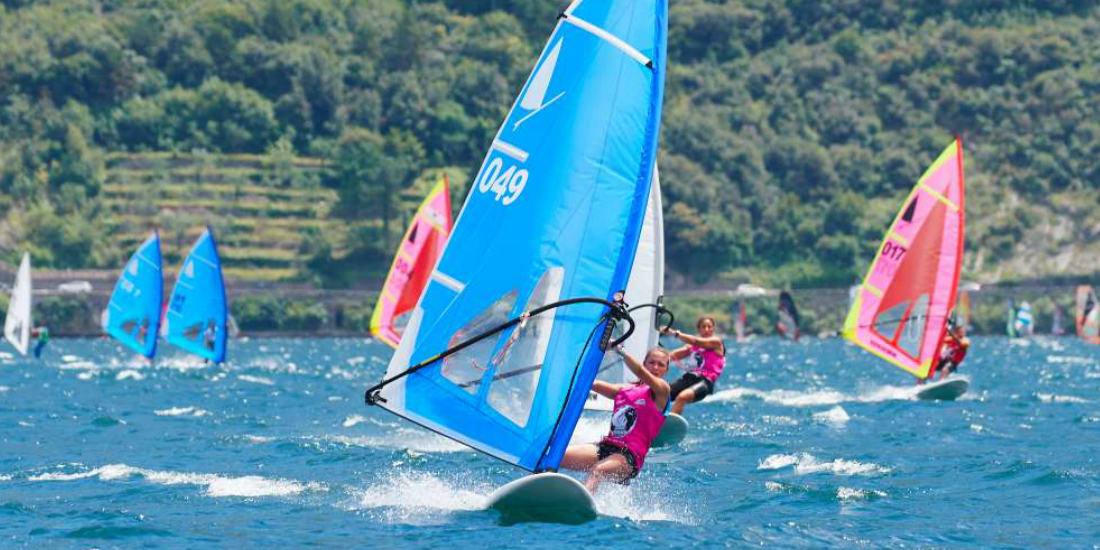 A WONDERFUL SUNNY AND WINDY SUNDAY FOR THE LAST DAY OF THE WINDSURFER WORLD TROPHY AT CIRCOLO SURF TORBOLE, GARDA TRENTINO: A LONG DISTANCE AT 8:00 A.M. WITH PELER WIND AND TWO CLASSIC RACES IN THE AFTERNOON WITH THE ORA, HAVE BEEN THE PERFECT END OF AN EVENT THAT HAS SEEN THE GREAT CHAMPIONS WHO MADE THE HISTORY OF WINDSURFING, BACK INTO THE WATER. RICCARDO GIORDANO, CHRISTOPH SIEBER AND CESARE CANTAGALLI ARE SOME OF THEM
MARTA TANAS, ANDREA MARCHESI, CHRISTOPH SIEBER, RICCARDO GIORDANO AND GIUSEPPE BARONE ARE THE WINNERS OF EACH CATEGORY
An intense racing Sunday at Circolo Surf Torbole for the last day of the Windsurfer World Trophy: great Olympic and World champions together with young competitors who wanted to try the new Windsurfer LT boards, the renewed in construction and design 15kg boards, launched this year and which seem to regain new life with more than 100 competitors for this event. After the four races held on Saturday with unstable weather and wind, the last day of competition started in the early morning with a wonderful north wind up to 20-22 knots that allowed to start the Long Distance at 8:00 a.m.: an about 14 Km course on the waters of Garda Trentino among Torbole, Ponale side and “Corno di Bò” with a funny bell ring at the finish line on the beach of Circolo Surf Torbole. At last, the wonderful sunny day offered a really amazing spectacle: the bright colors of more than 100 sails gave a unique overview that hadn’t been seen in years on Lake Garda. The World and Olympic Champions, despite their age and the certainly reduced competitive activity, have not denied and won their own weight category. A particular mention of the winner of the Long Distance, Riccardo Giordano (Albaria Mondello – 3 Olympic participations), 1st place in the medium-heavy weight category, and of the Sydney Olympic gold medal Christopher Sieber, 2nd place in the Long Distance and winner of the medium weight category.
En plein for Riccardo Giordano who won also the Overall ranking, followed by a very technical Alessandro Torzoni (LNI Piombino) and Riccardo Renna, the young athlete of Circolo Surf Torbole, also 3rd place in the Long Distance. Among heavy weight category, the winner is Giuseppe Barone, who prevails on the Dutch Elfring and on Francesco Lentini from Palermo (CV Sicilia). In the medium weight category, the Olympic Champion Sieber won, followed by Massimiliano Casagrande and Giovanni Di Stefano, both from Mondello Albaria Club. The Roman Andrea Marchesi – as well as in his years of full competitive activity – clearly won the light weight category; 2nd place for the French Le Ven and 3rd place for Mario Valdivieso (CV Palinuro). Two new young comers for the women podium with the victory of Marta Tanas (Circolo Surf Torbole), followed by Celine Bordier (who is now a coach) and 3rd place for the talented Sofia Renna (Circolo Surf Torbole), who also raced the Techno 293 North Championship held in the late morning of Sunday, in addition to the Windsurfer Long Distance in early morning and classic races in the afternoon.
During the prize giving ceremony, held by Luca Frascari (the president of the Windsurfer Class) and Maurizio Bufalini, there was also the celebration of Nicolò Renna for his silver medal at the RS:X Youth World Championship in Texas and for his official participation at the Youth Olympic Games in Buenos Aires.
The Windsurfer Class confirmed itself to be definitely a technical class, but also and always lived up by its so-called “Windsurfer Spirit” which fuses together sport and fun, sharing events that allow to forge great friendships: an essential example for many young people. Circolo Surf Torbole proved once again to be able to manage such important and different events during the same season, according every time to the needs of each Class, the age of the competitors and the competitive level: a certainly 360-degree vision of the windsurfing world. The collaboration with the European Class secretary, Edoardo Thermes, was extremely precious for the club to organize this event in the best way. 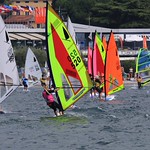