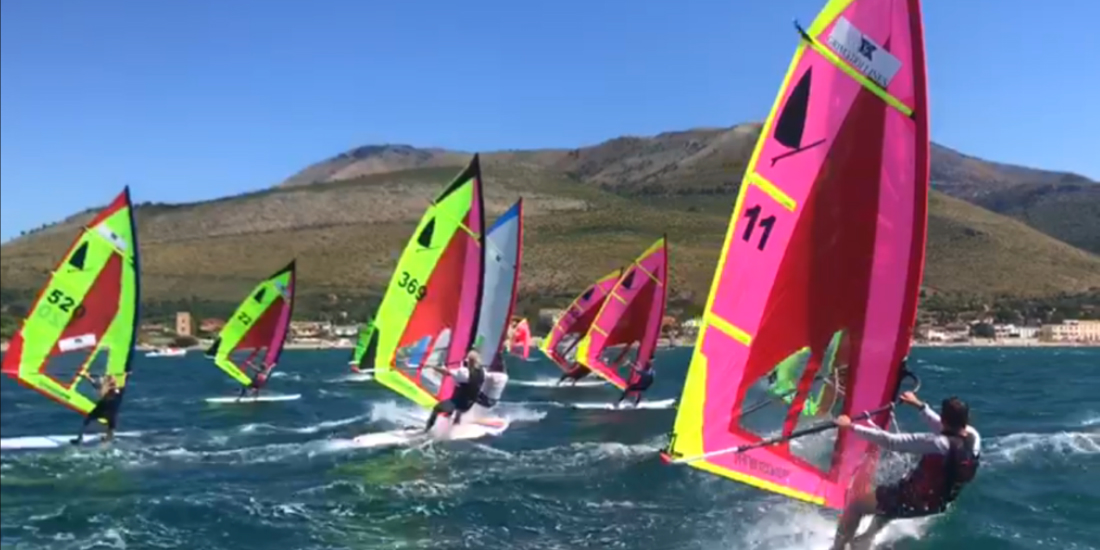 The beginning of a new era…
The Vindicio race, held during the last June week end, was the fourth national Windsurfer race of the year, yet foremost the international premiere of the innovative ‘Windsurfer LT’. And it couldn’t have been a better launch for the new board.
Though a NE breeze welcomes the Windsurfer class athletes since the early morning, their attention was captured, for once, not by the wind, but by the arrival of the van containing 27 brand new boards, still packed, to be delivered to each and every skipper, reminding the elderly of former emotions…

After the skippers meeting, all the competitors started enjoying the new boards with a wind blowing at 20 knots throughout the gulf waters.
Firts race start at 13:00, with a new course: the reintroduction of the Olympic triangle (though revised with the arrival downwind) vs. the traditional windward-leeward legs.

Seizing the good wind conditions, on Saturday 4 races are held, the first three back-to-back: 18-20 kts NE blew during the first two Olympic triangle, reducing its intensity for the third windward-leeward. After a 30’ beach break, participants go for the fourth windward-leeward leg.

After a few drinks, several comments and feedbacks on the new board, and a great dinner offered by the yacht club organizing the event, always keeping an eye on the wind forecasting again NE in the early morning the day after, the participants decided to leave the party to go to bed early, being fit for the Sunday race start fixed at 9.30.
The wind directions changes a couple of times, obliging the Race Committee to change the course. Massimiliano Casagrande wins the first race with a 10/12 kts ESE, followed, after a great comeback, by Alessandro Torzoni; third place to Mario Valdivieso riding his “classic” board.

The wind finally turns West, and after a further course adaption, the sixt and last race is won by Alessandro Torzoni with Mario Valdivieso (still with his “classic” board) and Giampaolo Fantozzi resp. in second and third place.
After six races, Alessandro Torzoni triumphs in the heavy weights category, followed by Giampaolo Fantozzi and Edoardo Thermes, who wins the last race duel with Stefano Bonanome, ranking fourth.

In the light weights Massimiliano Casagrande wins, followed by Mario Valdivieso and Francesco Pavolini.
In the womens’ Simona Cristofori wins, followed by Manuela Arcidiacono and Carola De Fazio.
A last positive note: among the 28 skippers, we acknowledged the participation of Luca Moscon after 31 years of absence, who managed to lead the first upwind leg of the last race. Welcome back!